The fragmentation of a liquid in droplets is an ubiquitous process both in nature and in industry. Whether one considers a dog that shakes its dripping hair, a man who sneezes, an inkjet printer or an atomizer, there is a point when the liquid breaks up into tiny droplets. By observing a single drop hanging off a nozzle, we can see the capillary bridge that binds it to the rest of the liquid get thinner and thinner until it eventually breaks. The last moment before the breakup is characterized by a self-similar dynamic, which follows different scaling laws depending on the liquid properties. The drop detachment is further complicated by presence in the liquid of dispersed objects, such as polymer chains, solid particles or bubbles. However, although the pinch-off processes for simple Newtonian liquids are understood, the case of such complex fluids remains little studied.

In the case of a dilute solution of polymer, the rate of strain of the liquid becomes sufficiently high to unwind then stretch the polymer chains. This process makes the fluid visco-elastic. We showed that the addition of sold particles to such a polymer solution lowers the strain rate threshold beyond which the fluid becomes visco-elastic. This phenomenon is explained by the increase of the local viscous stress due to the particles. Furthermore, this pinch-off experiment of visco-elastic suspensions could enable the measurement of local stresses in dense suspensions. 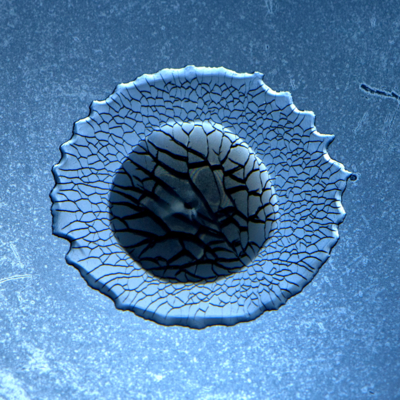 I did my PhD at the Institut ∂’Alembert under the supervision of Thomas Séon and Christophe Josserand.

Whenever a water drop impacts a cold surface – whose surface temperature is lower than 0°C – it freezes as it spreads. The solidification slows the drop’s spreading down, eases its fragmentation into droplets, leads to the liquid’s retraction and gives the frozen drop a certain shape. The nature of the cold surface is crucial in the freezing process. Starting from the Stefan problem, we developed a model for the solidification dynamics, which takes into account the thermal diffusion within the substrate. This model yields a better appreciation of the influence of the substrate’s thermal properties – its temperature and thermal effusivity – over the liquid’s rate of freezing. It enables us to quantitatively predict the dynamics of solidification, and therefore to study the freezing of a drop during its impact. As regards the drop’s spreading, we demonstrated that the effect of freezing could be assimilated to that of viscosity, as it slows the flow down. We showed that the fragmentation of a drop at low temperature was due to an increase in the density of air. Once spread, the drop is trapped by the ice, which hinders its retraction. We established a link between the shape of the spread drop and the duration of its trapping. Finally, we showed that the competition between the retraction of liquid water on ice and its freezing led to the different patterns observed.

Pictures from my PhD work have been selected by art gallery Art in Research.

My videos and pictures are often featured in FY Fluid Dynamics.

This video was presented at the 2018 Gallery of Fluid Motion. It summarizes the main topics of my PhD. 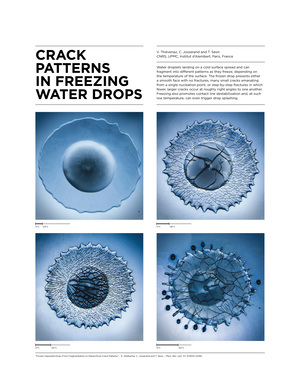 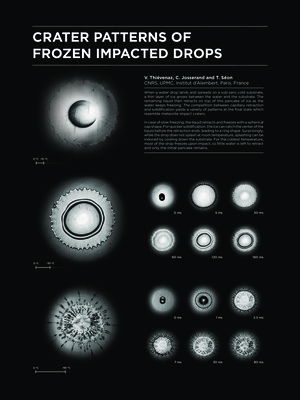 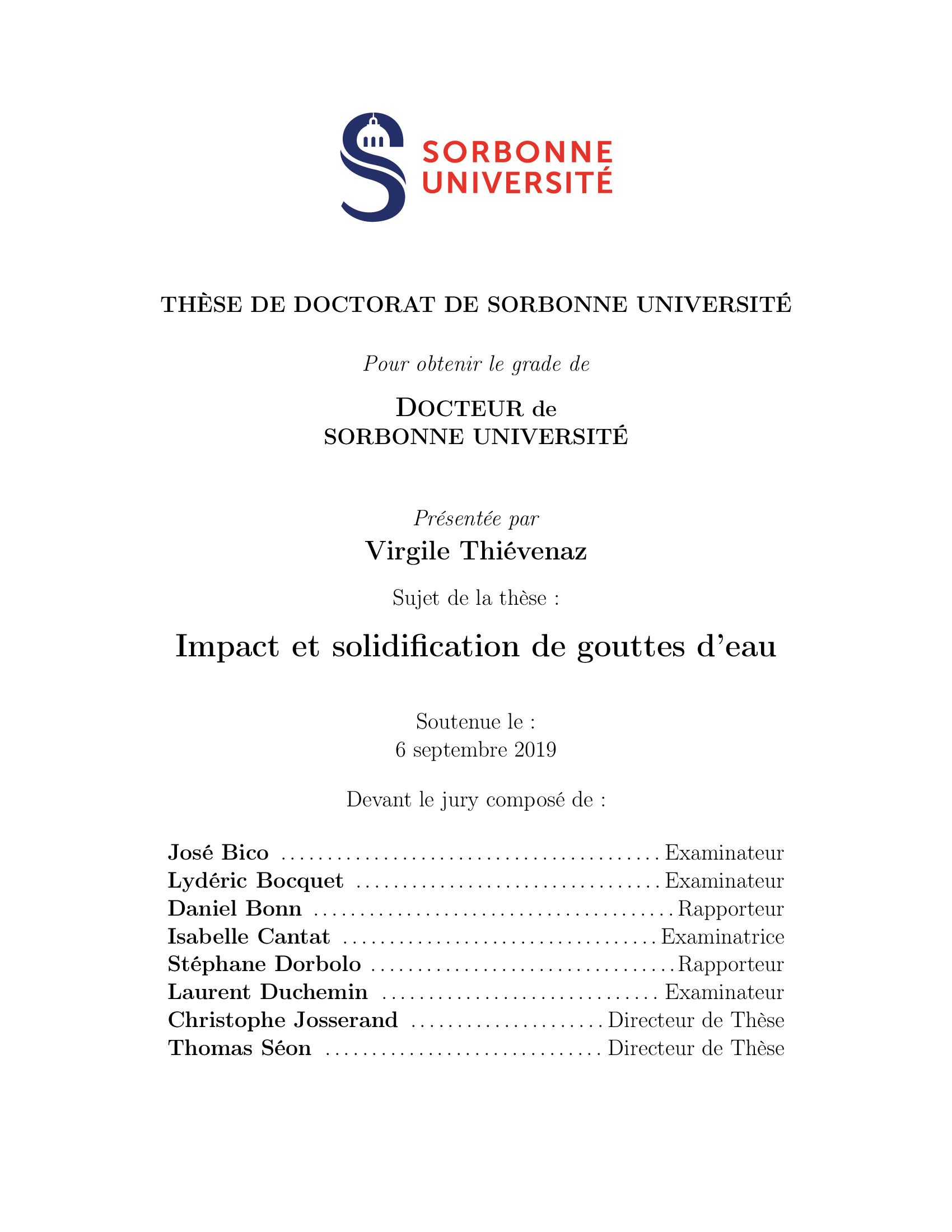